Why 20 years? Because this kind of well-written mystery movie with great acting and a big twist are rare to see. The last movie could amaze me with a compelling storyline is probably The Sixth Sense (1999), which happens to be 20 years ago.

Before talking about the storyline, let’s see its cast first, which is as amazing as the script. Honestly, only the cast would be appealing enough to watch the movie:

Christopher Plummer- the legendary actor who replaced Kevin Spacy to be J. Paul Getty in All the Money in the World (2017) and got Nominated by the Oscar Awards for Best Supporting Actor- who portrayed a brilliant mystery novelist who dies on his birthday. 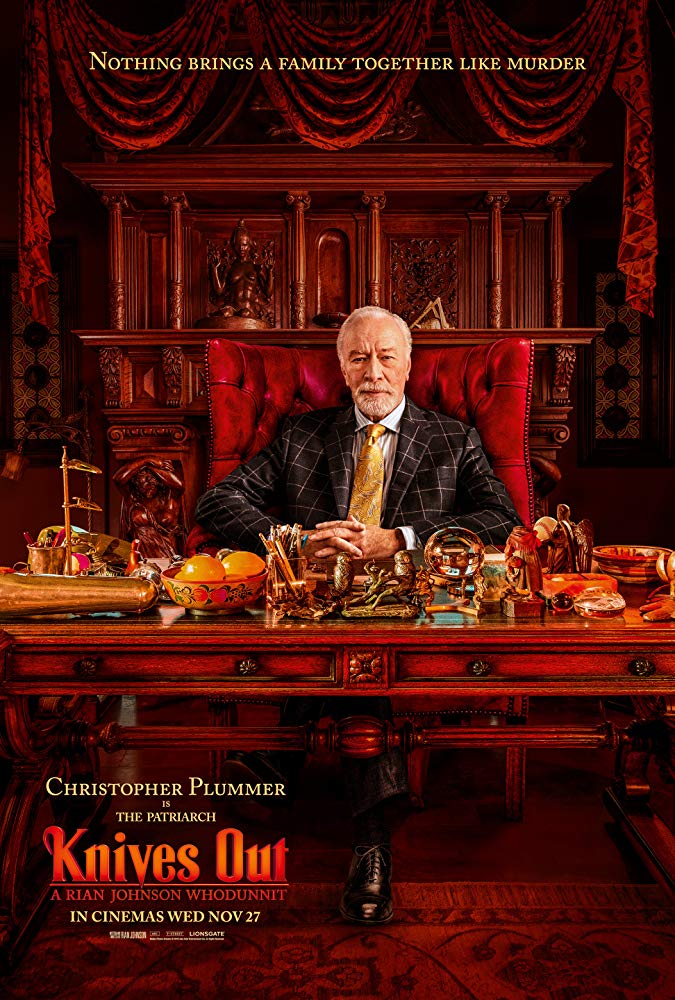 Daniel Craig- Current 007- who portrayed a private investigator hired by an unsub. 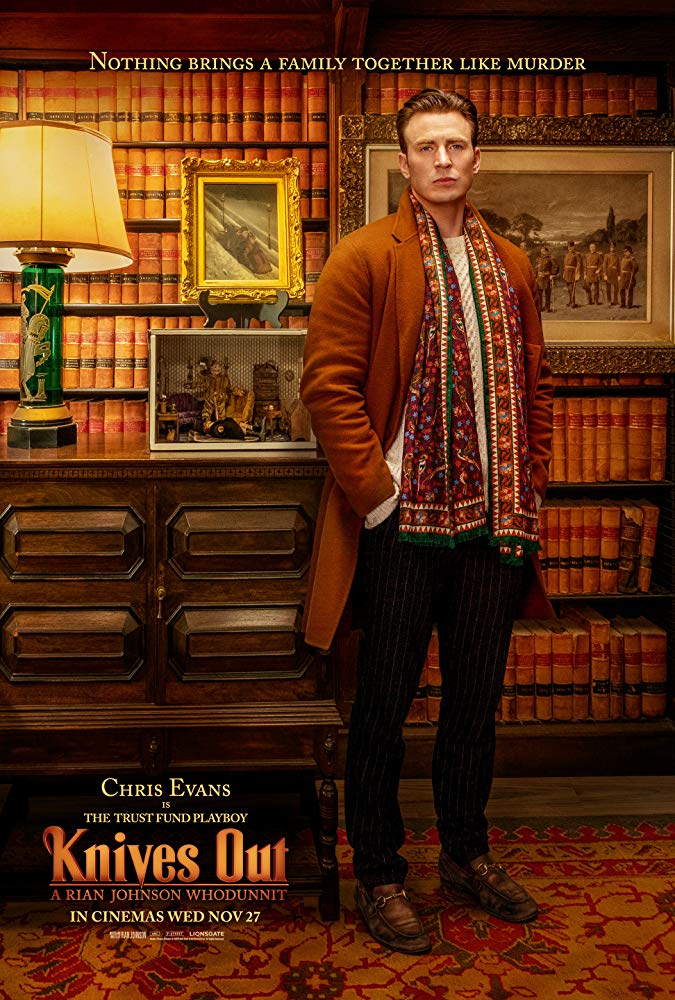 Ana de Armas- the lead actress- who portrayed a sincere, kind nurse to the old man.

Jamie Lee Curtis- the Halloween Michael Myers killer- who portrayed the first child of the old man, a superwoman build her own enterprise but still cares about her father’s wealth even she looks like she does not care.

Michael Shannon- who is known for his great acting- who portrayed the son of the old man and a younger brother who has been helped his father to publish his books but does not really want to write his own.

Don Johnson- the chief in the new Watchmen TV series, who portrayed the son-in-law of the old man and a father spoils his jerk son too much and wants his father-in-law’s money.

Toni Collette- who’s happened to be the mother in The Sixth Sense, who portrayed the daughter-in-law of the old man and a broke widow. 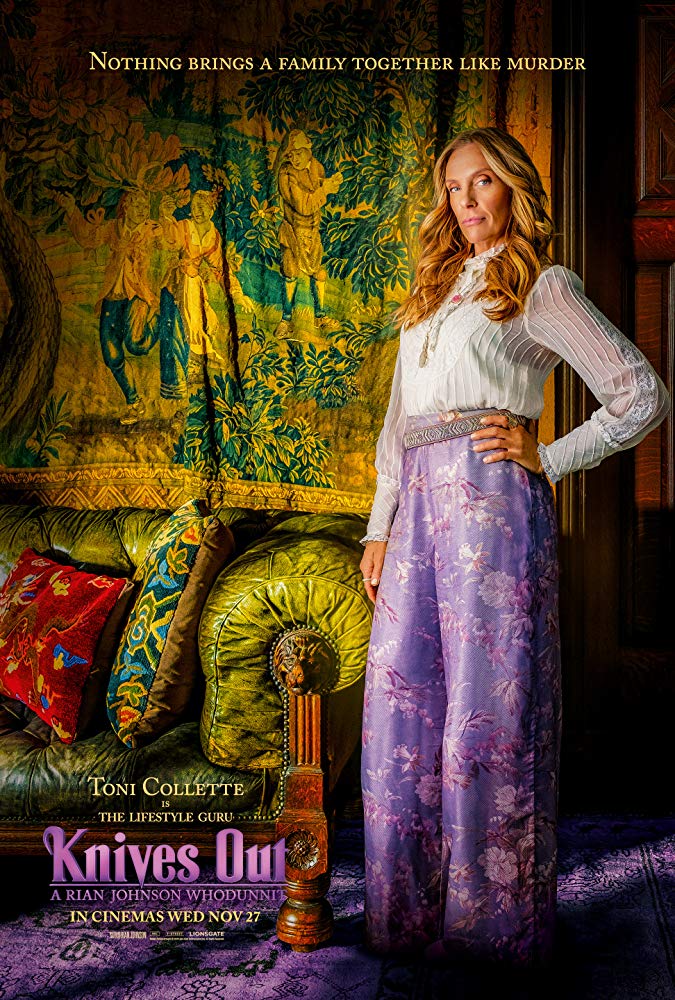 Katherine Langford- the lead in 13 Reason Why, which was her first Hollywood acting- who portrayed the widow’s daughter and a true friend to the nurse. 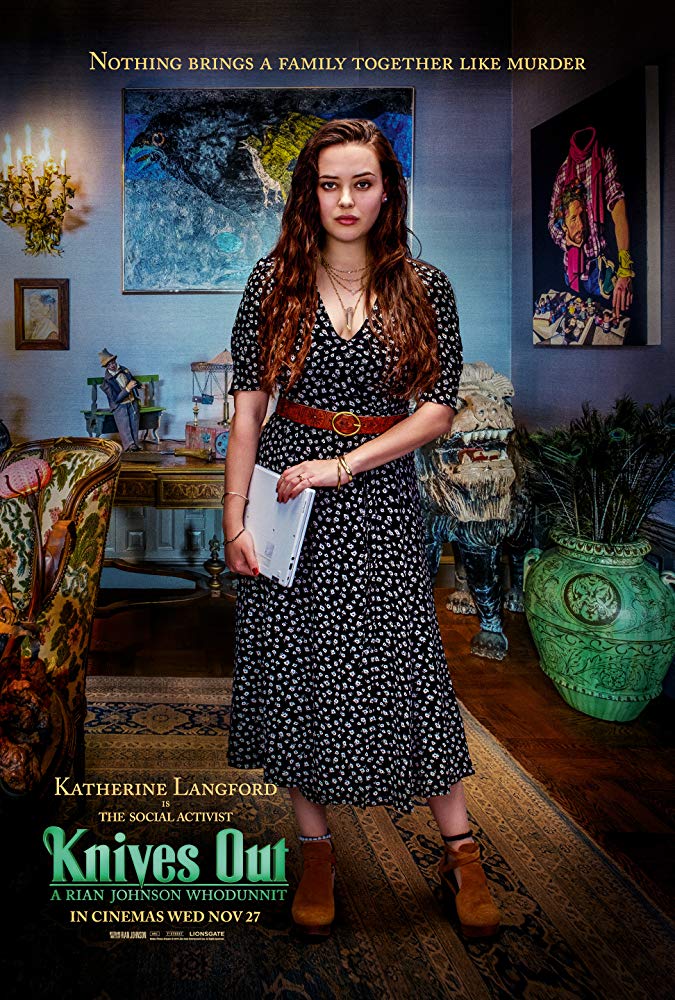 Jaeden Martell- a rising star from It (2017)- who portrayed the son of the younger brother, a young man only cares about his smartphone and the Internet.

The story begins with Christopher Plummer’s character, which is a rich old man who is a mystery novelist and dies in his study on the night of his 85th birthday, with a slit throat. This sudden, unexpected, mysterious death makes this family begin to reveal who they are really are. All the stories surround Ana de Armas’ character- a kind and professional nurse hired to take good care of the old man and the only one who’s close to him. Mostly a murder mystery would show you a lawyer will come to announce the will then the family would fight each other for the enormous fortune and a private or police investigator would observe and find the clues of the murderer and expose him; however, this movie directly shows the old man cut his own throat to make it look like a suicide so the nurse, who accidentally injected a lot of Morphine in his body, won’t go to jail because of the accident and instructs her how to get away of this. We all know the character who is shown to be the murderer of a story must not be the true murderer, so is this one.

But what makes this movie so good is the audience would know who’s the false murderer and would be worrying about her since the beginning because she is a good young woman and the murder was an accident. Based on this, the plot keeps going with an investigation and there are several times she is so close to get caught, especially she pukes every time she lies, but always luckily saves it in a funny way. During the investigation, the family members begin to show who they truly are and almost everyone is hiding the truth, to make the story more mysterious. Then an unsurprised cliche comes, the family lawyer announces the will and all the fortune goes to the nurse and causes a riot of the family except for one- the grandson who has an argument with the old man and leaves early at his birthday party and is a total jerk. He saves the nurse from the family but just wants to trick her to split out the truth, and the nurse, of course, tells him all the truth because she pukes when she lies and all the family members know about this. The grandson pretends to help her so he can get the money.

The nurse’s life has turned upside-down, from a poor nurse, who is a daughter of an illegal Latina, becomes a wealthy young woman. And the family members, who always say she’s part of the family, now wants to get the money back from her. When she tries to digest what has happened, she received an anonymous letter, which says “I know what you did,” (another murder cliche) and discusses with the grandson, who tells her the partial letter shows its a toxic report, and the place issued the report is burned out as they arrive after an email with an address was sent to her. Unfortunately, the private investigator, who earlier asks the nurse to be his investigating assistant, spots them at the fire scene and chases them with the police. The grandson is arrested and the nurse drives to the address when the investigator waits outside not knowingly. And the nurse sees the housekeeper, who is the first one sees the dead body of the old, poisoned and try to tell her something. Even though the nurse knows the housekeeper may tell the truth to the police, she still does her best to save her and confesses to the investigator.

As the nurse tries to tell the truth to the family, the investigator stops her after he reads the toxic report the housekeeps hide somewhere she always hides her weed. Because the toxic report shows the old man’s body was perfectly normal and the nurse did not accidentally poison him. And the investigator kind of putting the pieces together and questions the grandson, who’s released after telling police the truth about the nurse, with his hypothetic theory. At this moment, the nurse answers the phone and tells the grandson the housekeeps is alive and is ready to talk, which makes the grandson reveal the whole thing- he switches the labels on the medicine after the old man privately tells him he changes his will and leaves the fortune to the nurse. The grandson cannot change the will but can change the future- if the nurse accidentally kills the old man then she would her right to the fortune- and he is the one who hires the investigator to help expose the nurse and poisons the housekeeper, who sees him touch the nurse’s medicine bag, to keep her shut. When he faces the nurse and accuses her stealing the fortune that belongs to his family, she pukes again, on his face, which means SHE LIES.

Turns out, the housekeeper is dead, and the nurse lies about that to make the grandson confess. The grandson then goes mad because of being tricked and grabs a knife, which is used as decoration with other dozens of knives in the room, to stab the nurse. But, she is not dead because that is a telescopic knife. The grandson is truly arrested this time, and the investigator knows the nurse could be the murder at the beginning when he sees a tiny bloodstain on her shoes and asks her to be his assistant to see why she would do that. And the nurse eventually becomes the owner of the house and stands at the patio while the whole family looks up to her. THE END.

Although there are several cliches in the plot and the murdered is not so unpredictable, how the story is told is the key to making this movie so good. The writer/ director Rian Johnson tells a compelling story by leaving hints to the audience and designs the plot detail very well and shows this story in a comedy tone, which is difficult and incredible. Nevertheless, it’s a pity that there are about 10 family members but the suspects could be easily ruled out to very few people and some of the family members don’t really matter at all and could be deleted, such as the younger brother’s wife, and the true murderer is really not a surprise and the whole murder is still a cliche. If I was the wright, I would make the death of the old man is actually his own game; he is disappointed with his family and switch the label of his medicine and designs his own death like a murder since he is a mystery novelist, to mess up with them and force them to show their true faces. In the end, his family destroys each other and the one who has truly taken of him- the nurse- gets his great fortune with threating by his family. Even though this movie allover is absolutely a must-see, and I believe you would still enjoy how the story is told and shown even after you read my review before watching it.

For those who already watched it, who did you guess that could be the true murderer at the beginning? Please leave a comment if you would like to share. For me, I guessed it was the old man’s plan as I mentioned above.

(All pictures collected from IMDB Knives Out (2019))

Skip back to main navigation

2 thoughts on “Knives Out – Probably the Best Mystery Film I’ve Ever Seen in the Past 20 Years! (Spoiler Alert)”

This site uses Akismet to reduce spam. Learn how your comment data is processed.

We use cookies on our website to give you the most relevant experience by remembering your preferences and repeat visits. By clicking “Accept”, you consent to the use of ALL the cookies.
Do not sell my personal information.
Cookie settingsACCEPT
Manage consent

This website uses cookies to improve your experience while you navigate through the website. Out of these, the cookies that are categorized as necessary are stored on your browser as they are essential for the working of basic functionalities of the website. We also use third-party cookies that help us analyze and understand how you use this website. These cookies will be stored in your browser only with your consent. You also have the option to opt-out of these cookies. But opting out of some of these cookies may affect your browsing experience.
Necessary Always Enabled

Any cookies that may not be particularly necessary for the website to function and is used specifically to collect user personal data via analytics, ads, other embedded contents are termed as non-necessary cookies. It is mandatory to procure user consent prior to running these cookies on your website.